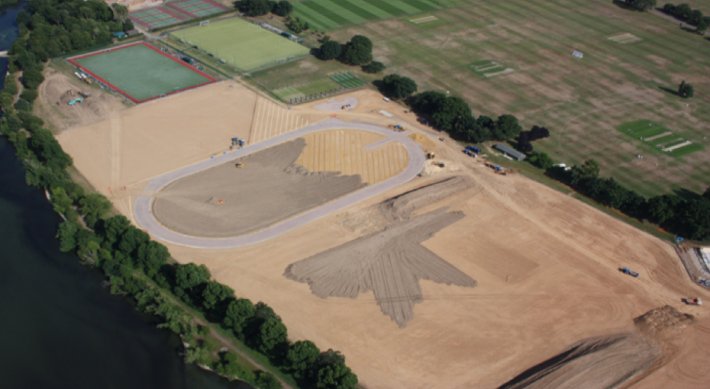 Merchant Taylors has always been, and continues to be, very much a rugby school so it was our privilege to be awarded the contract via Gardiner and Theobold and Sports Turf Consulting to create two, new rugby pitches one being within a new 400 metre running track, a major feature of the project. The cutting list for tenders also included a new cricket ground comprising of three new cricket tables and outfields.

The duration of the project (approx. 30 weeks) meant that works coincided with the schools term time and therefore a comprehensive health & safety plan was drawn up to include traffic management for plant & material deliveries and the interface between pupils & staff who continued to use the remainder of the school playing fields.

Agripower set about levelling the site, taking out a half to one metre large bump with significant re-grading. This was no problem at all, but what the contractor discovered once earth moving had begun was. The movement of equipment revealed a significant underlying problem within the first two weeks on site. What was uncovered could only be described as weird ground conditions, which meant that the ground was literally moving under our traffic.

The unexpected instability was caused by unusually high silt and clay combination in the sub-soil, quite unlike the sound gravel-type conditions elsewhere in the school grounds. This unwelcome problem was found in localised areas scattered across the whole of the project site. It seems this tract of land is reputed to have once been where the Thames flowed which may account for the localised nature of the sub-soil deposits.

This meant that the goalposts had been moved and a whole new operational plan had to be adopted if the work was to be completed on schedule. Screening 12000 cubic metres of topsoil the top four inches - was to have been an in situ operation, but inevitable rutting would have meant a lot of sub-soil being squeezed close to the surface and consequent grass establishment inconsistency, so the contractor had to switch to track dumpers. Drainage at 3-metre centres also had to be introduced and the soil screening process suitably altered.

An additional part of this operational plan the company also undertook to use cement stabilisation of the running track formation to ensure that there was no movement in the subsoil as heavy construction traffic rolled on top.

The project included tree and shrub planting and one years maintenance contract.