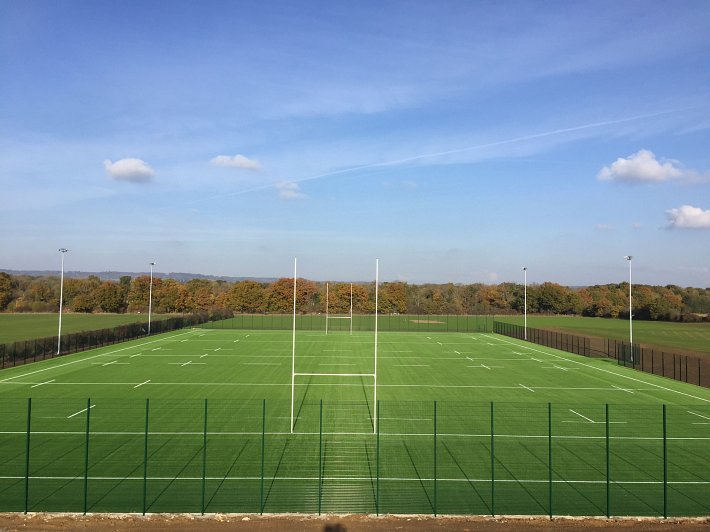 With the schoolâ€™s roll now in excess of 1000 students and planning to increase to a 5 form entry school, over three times the number of the 1930's, with no increase in pitch area since then, the school sports facilities were in desperate need of expansion.

The creation of the playing facilities designed by sports pitch consultants TGMS Ltd, work has been carried out in two phases, the first phase comprising of a 4.5 hectare field dedicated to 4 rugby pitches, 1 cricket square, 2 non turf cricket wickets and a 5 lane non turf training net. This work was predominantly completed in 2015. In 2016, a similar sized field was re-modelled to provide an additional two natural grass rugby pitches, cricket square and non turf strip, a multi use natural pitch and a 3G floodlit rugby/football pitch.

The existing levels of the field were generally suitable for pitches and just required minor modification/smoothing to improve them. Taking 3D data made available by TGMS it was possible to establish accurate grades with which to work to, to enable accurate levelling within the topsoil to provide a better finish than was called for in the specification.

Following completion of grading, drainage installation commenced. To the north of the field is a large lake which receives flow from a ditch to the east side of the field. The lake in turn overlows to the River Medway. Relevant permissions had been sought and approved to discharge to the ditch at a restricted 5 l/s, however, due to the high ditch levels it was necessary to install a sump & pump system to get any drainage water into the ditch. This allowed us to control the discharge rate at the same time by specifying a suitable pump.

Following a winter break, final cultivations to the playing field included ameliorating a 25mm layer of sand into the topsoil surface prior to fertilising and seeding which was completed in May of 2016. Grow in has been slow due to the prolonged dry period since June, however the pitches were suitably grown in to allow installation of secondary drainage using a Koro Topdrainer during the final weeks of September

The second phase field had reasonably steep slopes in its upper half and to achieve final levels a major cut and fill exercise was required. Approximately 11,000m3 of topsoil was stripped and stockpiled to the lower section of field which required less modification. The upper half of the field underwent a cut and fill exercise to create the plateau for the 3G rugby pitch and a separate plateau for a general use or hockey field. There are future plans to potentially turn this into an all weather hockey pitch at some stage. The total cut to fill volume was 10,500m3.

The original design specification for the 3G was for a traditional build of stone sub base, tarmac layers, shockpad and 60mm carpet (in this instance, TigerTurfâ€™s Total Turf 60 XQ), however, following discussions with TenCate, TigerTurf, TGMS and most importantly the School a decision was made to use the new Ecocept porous pavement/shockpad system specifically developed for synthetic turf sports surfaces. It integrates seamlessly with synthetic turf products enhancing biomechanical properties, offers load bearing capacity to reduce or eliminate the need for a conventional thick layer of crushed stone, and provides a performance layer with capillary action, which means that it has superior lateral drainage capabilities.

What made this choice appealing to the school was a combination of savings to cost and programme, but of equal importance was the huge reduction in lorry movements to and from the site as a result of eliminating both stone and tarmac layers. However the system does require a strong stable base with a minimum CBR value of 30%.

As work progressed with the stabilisation it became apparent that there were issues with the subsoil. Some pockets of the clay had a very high silt content that made the ground very mobile when travelled, even in a dry state. When the initial stabilisation was completed and CBR's tested, some areas of the pitch formation failed. These areas were re-treated and following subsequent testing were passed as satisfactory under the watchful eye of John Grindrod from TenCate. Being a new product, TenCate are closely monitoring all Ecocept installations.

Due to the high permeability (3000mm/hr) of the Ecocept layer (sideways movement of water has been lab tested to give 2000mm/hr), the traditional drainage layout of main drain and laterals at 10m centres is abandoned in favour of an L shaped drain form from 225mm diameter twin wall just inside the kerbline of the lower two sides. Drainage water will discharge to eventually flow through the sump unit, however to make sure that undue pressure is not put on the pump and risk flooding to the natural pitches, discharge is routed through an attenuation cell similarly restricted to 5 l/s. It is also the Schoolâ€™s intention to build a proper pavilion at some time and the cell has been sized to accommodate this future flow. In between pitch and attenuation cell we have installed a monitoring flume to enable collection of flow data from the 3G pitch. Whilst we will initially collect the data, the School is interested in learning the ropes so they can set up a little science project for students.

At the time of writing, the carpet was being laid to the 3G, following which the car park and access areas will be finished in time for a mid-November handover to the School. 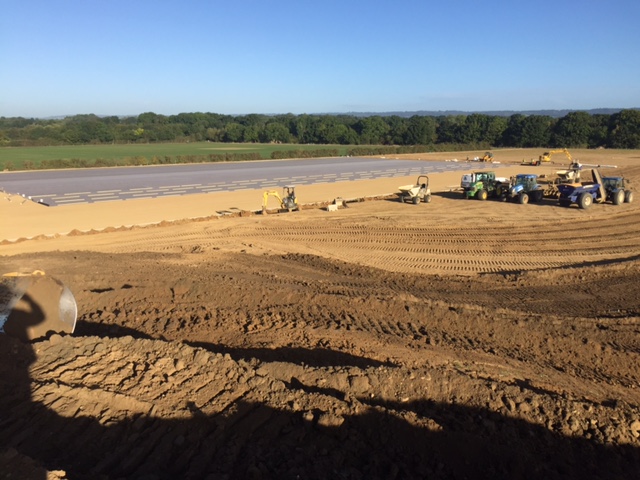 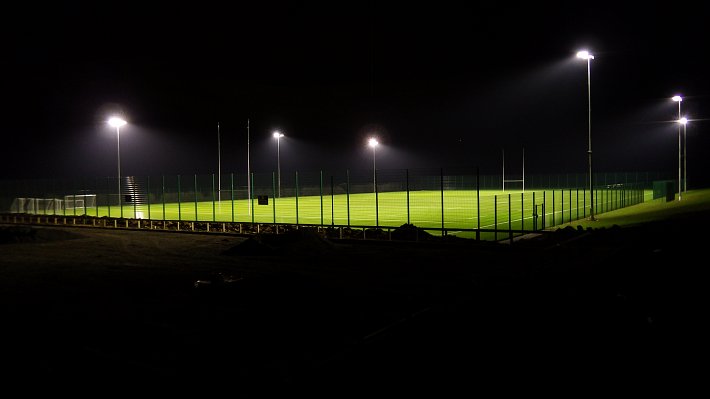